(aka Eierzucker in Nuremberg and 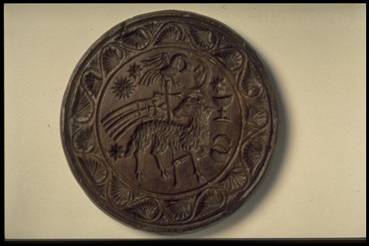 Note:  best if prepared one month before Christmas or Easter

One pound of 10X powdered sugar

¼ to 1 teaspoon pure (USP) anise oil (as opposed to extract which is diluted with 70% or more alcohol or just “flavor” which is probably a soy oil base; if you use these, you will need four times as much as the amount of essential oil)

One tablespoon of fresh lemon zest

2.      Gradually add in the sugar and salt.  Add butter and/or lemon zest, if desired.

3.      Beat these ingredients on medium speed in mixer for fifteen minutes, so it thickens.

7.      NOTE: “Dusting a mold with powdered sugar before using it prevents the dough from sticking and keeps the mold clean and carved lines sharp,” according to Gene Wilson.

8.      Roll or press floured Swiss or German mold of your choice onto dough.

9.      Cut apart along the imprint lines and place on buttered/greased baking sheets (note: I always scatter anise seed on the cookie sheet, then placed the cookies atop them) about one inch apart.

10.  To be really fancy, you can color the details with a brush, using food color diluted with water; alternatively, just brush them with egg white.

11.  Allow to dry for four to six hours.  Or, for even better, let rise overnight, but not necessary.

13.  Store baked cookies with some anise seeds in a tightly covered container for at least two weeks.  To soften, place a cut apple in the container a couple of days before serving. 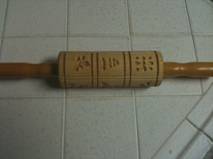 NOTE FROM HSR: “Because of my own Pennsylvania Deutsch (German) ancestry and because I grow anise seeds, Springerle is high on my list…This is a cookie which needs several weeks to ‘ripen.’ A trick to allow you to skip this period, if you are short on time, is to add one teaspoon of glycerin (from the drug store) to the recipe.

ADDITIONAL BACKGROUND INFORMATION:  After the Second World War, HSR admired the Springerle cookies of her friend, Patty Hovorka, who would not share because this recipe was one thing she did really well; instead, HSR found this recipe in the Columbus Dispatch (it was reprinted on page 2D, 2 February 2011 by “John T. Dickman…from a family cookbook I assembled years ago.”

HISTORY OF THE WORD:  Etymologically speaking, the word “Springerle” supposedly comes from Swabia, a southwestern German dialect, and dates to the 15th century at least—meaning, “little jumping horse” (according to the Oxford Dictionary of English), but could literally mean just sugar and eggs.  Yet again, this cookie is an example of syncretism where culinary scholars trace them to the Julfest, a midwinter celebration of pagan Germanic tribes.  Of course, the Catholic church preferred Biblical scenes for their teachable moments and a fourteenth century mold (at the earliest) has been found in Switzerland—a “round shaped mold pictures the Easter lamb, and originates from the St. Katharine monastery [convent] in Will St. Gallen.”

MOLDS:  Swiss molds, modern ones as well as ancient replicas, can be ordered at http://www.springerle.com/en_home.html/ while my second cousin, Jeanine Schroeder likes http://houseonthehill.net/ (they do have a large, mystic Paschal Lamb’s “blood spurting into a communion cup.”  However, I am quite pleased with the one which Oldrich Kvapil of Hořice, Czech Republic cut for me in early 2011 (see photo).